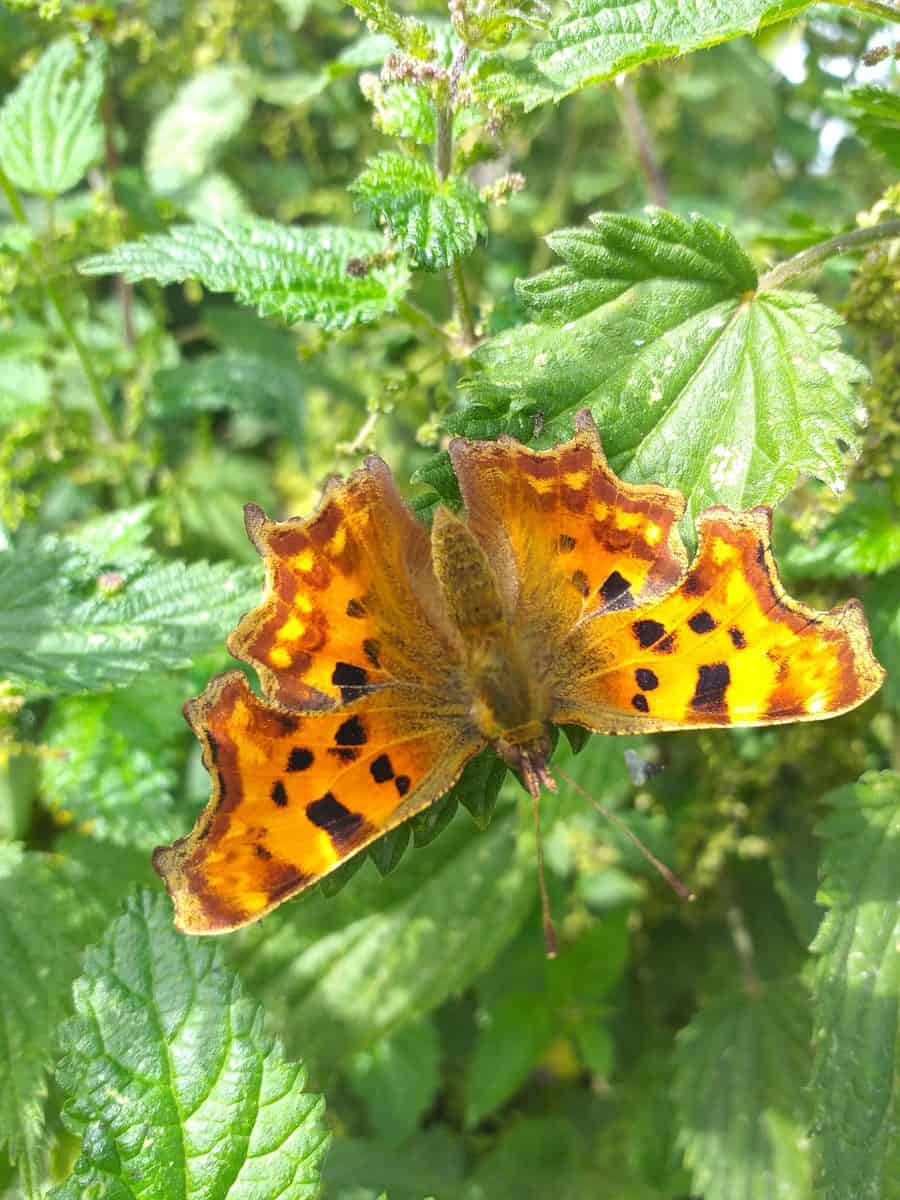 Could farm output improve along with biodiversity?

With the ever extending lockdown combined with home schooling, trying not to loose ones mind becomes ever more difficult. Thankfully for us we have the farm and land around to keep us busy. For the last 7 years almost to the day we have been trying to increase farm output by an ever increasing move towards intensive farming practice. With this mindset last autumn the sheep were sold so that we could focus on more fields for hay cutting and then grazing greater numbers of goats in the late summer and early autumn.

This year my outlook has changed somewhat on the farm and its management. Stripping the farm of the sheep throughout the winter has indeed increased the amount of grass available for hay cutting but other changes have occurred in the process, insect life seems as though it has shot through the roof with large numbers of butterflies populating the farm once more I’m asking myself is this because the variety of flowers have increased too now the ground isn’t grazed year round within an a blade width of the soil? Or have they, is it just that I have the time to slow down and appreciate it more? Certainly one memory shortly after we purchased the farm stands out, having been left for many years to do its own thing. I was walking through the long grass, thick and deep kicking up clouds of butterflies with each step, seemed like so long ago.

Back in September 2019 I found my love of birdwatching again. Bird watching was something I did with my father as a child. Having found the passion again I have started looking at recording the species flitting between the berry rich branches of the hedgerows surrounding our fields! In 15 minutes 25+ species could be counted with ease, with nine of those being on the endangered species red list and a further five on amber list! At this time we have 3 red species nesting in the farm yard area alone! It unfortunately isn’t all good we have seen at least an 80% decrease in swallows over last 5 years.

In contrast to our own farm, in late autumn last year we took a walk around another farm just the other side of the valley, not more than three miles away. This farm is in HLS (higher level stewardship) management and had won recognition for its work. Excited to see a greater number of species as a result of the “farming for wildlife” and the work that had gone on, I was to say at the very least shocked! In comparison to my own farm and my 15 minute walk with 25 species, this thirty minute walk about that farm revealed just a handful of birds with a species diversity that could be counted on one hand, and my ears were deafened by the silence! Was it that I was that used to the hedges and fields of our little patch being filled with the vocalization of over 25 species at any one time?

It is true that farmland birds have decreased rapidly over the past few decades as a result of the ever increasing use of intensive farming practice involving herbicides and pesticides, but what I could suddenly see was how the other areas of management were impacting the food reserves available. For example hedges across the local area had been flail mowed decimating the berries that would have formed on the tender new growth through the summer and opening up the heart of the hedge so no small bird could shelter from the cold east winds. What we have on our own farm without planning was in effect an oasis in a desert!

Now I have always felt that things happen for a reason and I recently listened to an audio book (I rarely have time to read) by Isabelle Tree called Wilding. In this book she discusses the naturalisation of her 3000+ acres of estate and the increase in biodiversity that subsequently occurred. I am encouraged by her methods and results to try a little bit of what Isabelle writes about. Now don’t get me wrong this wouldn’t work for us on just 11 acres, I cant help but think that this would ensure a rapid collapse of the business that we have grown, but it revealed to me that there might be a different way. Take the ideas of naturalizing and rewilding our farm, one in which invertebrate rich meadows and hedges filled with birds could work for us! As a result I have started formulating a plan, a plan that I hope will work! And so today took my son William for a walk down the field to collect the memory card from the camera trap and see what he thought of the plans, if he couldn’t see the logic I knew he would tell me, he’s like that.

As we headed into the ‘spring paddock’ I stopped, “Hear that?”

“No?” was the reply from William,

“Listen to the bird song” I pause while I wait for it to start again “….that one!”

With typical childish “Yer what” from William I gently fall to my knee, pull my phone out and play the song from a variety of species starting with the Robin, “we must try to match the tune pitch and tempo to what we can hear just like we did in music lesson the other day”

“Nope that’s not right” he says. I play Blackbird next, “No wrong tune”, then I play the song of the Mistle thrush “That’s it! What is it?” William asks me.

“That’s a Mistle Thrush, they are a red list bird” I say.

Suddenly more interested as he has heard me talk about the red listed birds and recently the thrushes “Excellent we don’t have many of them!”

We move on down the field I explain “They are here along with a lot of the birds because of the thick hedgerows that give them places to hide and find food, in this country we like to cut the hedges, why do you think that is?”

“To keep them tidy?” William questions, his head tilted to one side reminiscent of a dog asking for a treat.

“Yes but do we need them tidy” I point at an entangled patch of brambles, sloe, and hawthorn some 12ft wide. “Is it in the way”

“So long as they don’t encroach to much some sprawl is ok! When they get to much we can lay the hedge to let it regrow.” Laying is the art of cutting half way through the trunk of the tree so it “lays” down, this thickens the bottom of the hedge and promotes regrowth, and I hadn’t realised until recently this was also a way of farmers of old feeding the stock in the winter by feeding the trimmings.

Pausing to remove the memory card we had come to collect from the camera trap, a butterfly seemingly randomly skips past. Taking the opportunity the wildlife was providing me I prompted William with the question “We get lots of bugs on the farm because we don’t use sprays to kill them, what might kill the bugs if we got to many?”

“Exactly, if we can give them a home then they are here waiting and eating the bugs. What else might we get?”

“More bugs, different ones and some of them might be rare!”

“I like that word, bio-di- ver- sit-e” as he recalls the word lodging it in his memory to recall later in a spate of verbal diarrhea.

“Lets walk up to ‘New Wood’” I say lifting William over a new fence we have put in to restrict the goats browsing out the lower parts of the hedgerows later in the year. We walk through what has been for the last few years the main sheep field, now knee deep in grass.

“Could you leave this as meadow dad?” William questioned

“If I change how and when I mow the grass for hay it will change the plant species in it. You know I always try to cut everything in the same week, that is not going to happen now! Some of these fields will be left until the grass and flowers seed, this will give us more types of flowers and somewhere that the grass snakes can hunt”

“We have Grass Snakes?!”

We crouch in a clump of grass next to New Wood. Our ‘New Wood’ is 300 trees of different types, planted in a day whilst William was at school just before Christmas. At the time it looked like a collection of dead sticks shoved in the ground in a random pattern. Now about 4 months later each stick had a pompom of leaves bursting from the top in an explosion of green.

“Wow you have a lot of oak trees” William exclaimed. Not all the trees are oak trees but his Mum does love them and why would she plant anything else?!

“There’s all sorts of trees here, this will form an island in the farm for animals to take shelter, it will also lead to more biodiversity”. From our clump of grass where we are sat I start pointing out the different tree species, “That’s an Oak, Willow, Rowan, Silver Birch, Alder those are the big trees in Grandads wood, Poplar”

I point to the ground at his foot a small flower spike with a clump of random pink flowers, “That’s Milkmaids”

“Can you name any others?” I ask him.

“Clover, Thistle, Dandelion…” a thoughtful pause as he had run out of what he knew and drew a blank.

We stand and walk uphill back to the house to start the next home school lesson, “These ‘weeds’ are an important part of grass land habitat but soon these weeds will be suppressed by other new species in competition with them now there’s no sheep grazing all year, those species will be better diet for the goats and we won’t have to spray them.” I see a fluffy seed head of a dandelion “should we blow it?” I ask.

So now that I have the sons blessings to keep our small plot wild, we shall be doing our little bit to continue to be an oasis within the desert.

This site uses Akismet to reduce spam. Learn how your comment data is processed.

This website uses cookies to improve your experience while you navigate through the website. Out of these cookies, the cookies that are categorized as necessary are stored on your browser as they are essential for the working of basic functionalities of the website. We also use third-party cookies that help us analyze and understand how you use this website. These cookies will be stored in your browser only with your consent. You also have the option to opt-out of these cookies. But opting out of some of these cookies may have an effect on your browsing experience.
Necessary Always Enabled
Necessary cookies are absolutely essential for the website to function properly. This category only includes cookies that ensures basic functionalities and security features of the website. These cookies do not store any personal information.
Non-necessary
Any cookies that may not be particularly necessary for the website to function and is used specifically to collect user personal data via analytics, ads, other embedded contents are termed as non-necessary cookies. It is mandatory to procure user consent prior to running these cookies on your website.
SAVE & ACCEPT

Free Delivery Across Our Store! Dismiss